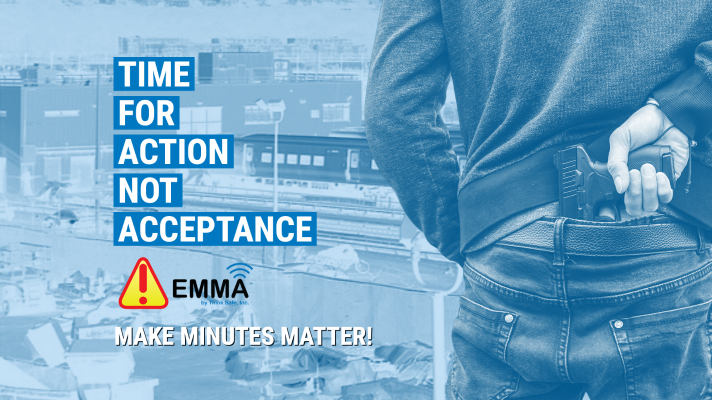 According to James Densley and Jillian Peterson, founders of the Violence Project, “If you look at mass shootings over time, two things are alarmingly clear: The attacks are becoming far more frequent, and they are getting deadlier.” EMMA, an Emergency Management Mobile Application by Think Safe was developed because the recent increases in mass shooting incidents and deaths demand action — not the acceptance of violence as an inevitable fact of American life.

The loss of life seen in the recent mass shooting by a California transit worker from the Santa Clara Valley Transportation Authority (VTA) has far-reaching impacts on citizens’ mental health, anxiety, and perceptions of safety. The review of data on incidents such as this that have occurred and incidents that that are believed to have been averted have helped develop tools like EMMA via a comprehensive program approach that makes minutes matter. This is a circular approach which includes data review for continuous improvement, helps organizations — be they schools, businesses, communities, municipalities or religious facilities — prevent, prepare and respond.

Here is some what we learned from the news reports on the deadly shooting on May 26, 2021, at a VTA hub in Santa Clara Valley:

These insights correlate to evidence-based prevention, preparation and response strategies available through the Emergency Management Mobile Application (EMMA). Here are just a few questions that the features of EMMA could have during the VTA shooting:

Click to Learn More About EMMA's Critical Features
Preventing, preparing, responding and reviewing post event data can all lead to improved timelines for response and care in extreme situations where life is on the line. We’d love to show you how EMMA can make minutes matter.
BOOK A DEMO

EMMA for BUSINESS subscriptions are starting at $1,500 with unlimited users and all features of our patented EMMA dashboard

Although we are busy making minutes matter, we can’t wait to show you how EMMA can help you do the same. Fill out the form below and a representative will reach out to you to schedule a demo. We look forward to connecting with you.

Tap Into the American Rescue Plan (ARP) and CARES Act Funding to support your PPE and AED Programs and get EMMA for Free with One of These Amazing Bundle Deals!

Contact us with questions or to learn about our other bundle deals.

We’ve received your form submission. A representative will be in contact. Feel free to close this window and continue browsing.

Your email is 100% secure with us and you can unsubscribe at any time.